“Geek-Girl” is back, and now that this series is ongoing, things are going to get more intense!  The plot synopsis is described as follows:  “Extra-Sized Jump-On issue! Geek-Girl is joining a super-team and getting a live-in HQ! And while she and her BFF Summer head to check it out, some of her would-be teammates are on a plane heading there – and they may not all make it! Meet The Whupper, The Minger and Guano Guy – as Geek-Girl‘s new direction starts here!” The title of this story is “School’s Out,” so where does the story go from here?  Read on to find out, without spoilers, of course! 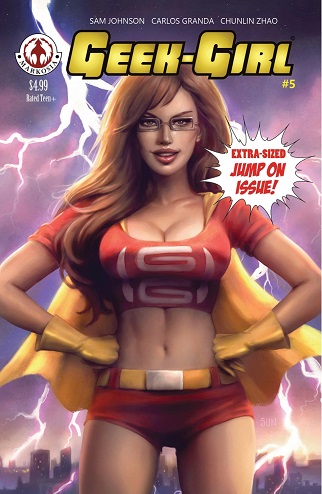 The story begins with a two-page prologue set in Detroit, where readers are briefly “introduced” to an unnamed male character who’s performing a resurrection ritual for someone named Kristina, and just as the candles are burning down to the bottom, there’s a knock on his door.  “Knock-knock,” “TEEWH,” readers not only see, but they can almost hear the gun going off with a silencer, and witness the male character getting shot, then falling down to the ground. End Prologue.

“Geek-Girl #5” is written by Sam Johnson, art by Carlos Granda, colored by Chunlin Zhao, and lettered by Paul McLaren. 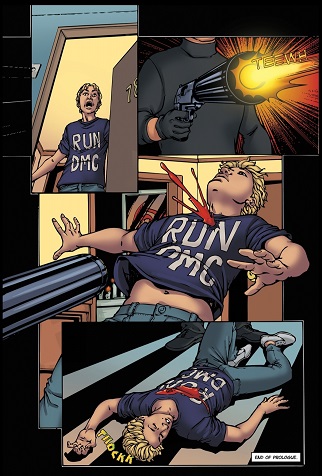 The story continues at the location of this series, in Acorn Ridge, Maine.  Johnny Carlyle (the former super-tech weapons dealer), is having a press conference.  Here he talks about the re-opening of the Acorn Ridge Main Street Police Station, the newly formed Kaye Foundation (named after Ruby Kaye, AKA Geek-Girl), and most importantly…the formation of a brand new super-team, headed by Geek-Girl, and officially sanctioned by Neon Girl (Maine‘s long-term resident super-hero).  After the press conference ended, Johnny hands Geek-Girl the key to her new HQ and new home.  Johnny takes off quickly because his wife is in labor.  A serious, yet touching conversation ensues between best friends Ruby Kaye and Summer James.  Reading each panel will make readers see the friendship that these two ladies have, and as I’ve stated in previous reviews of Geek-Girl issues (click HERE to read them), “readers are there, witnessing these events right before their eyes…these are characters readers will care about!”  Geek-Girl having Summer James hang on tight to her back, so they can fly together to the super-hero HQ, was fun to see! 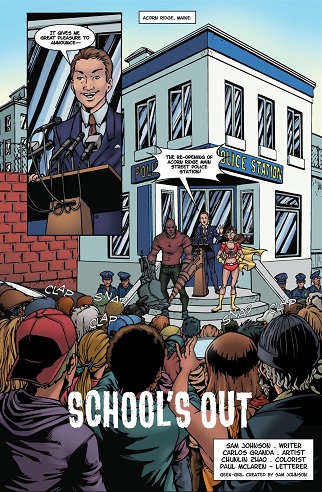 The story cuts to people talking on an airplane, but with further inspection, readers will see two costumed super-heroes sitting in the back.  Then we see the guy who was shot in the prologue of this story, what’s going on?  Following this, Geek-Girl and Summer James arrive at the super-hero HQ, and things look cool!  From here, the story shifts from three different locations, the hospital where the Carlyle‘s are waiting for their baby to “arrive,” the airplane where we saw the costumed super-heroes, and the super-hero HQ where Geek-Girl and Summer James are.  Readers will meet new super-heroes The Minger, The Whupper, Guano Guy, and Mr. Marvelous Man.  Though the story ends with a happy vibe, things are being set up for something major.  Only time will tell what will happen next.

Overall, this story isn’t packed with action sequences like other issues, but this story sets up events that will be up-and-coming, and it’s going to be phenomenal!  For example, the guy who was shot down in the prologue, readers will be left wondering what’s going on with him, and it’s going to be interesting!  Seeing Johnny Carlyle changing his life since he’s a dad now, it was a wonderful change to see, because becoming a parent really does change people.  The friendship that Ruby and Summer have, it’ll make people think about their best friends and how lucky they are to have them in their life.  Seeing Geek-Girl and all these new super-heroes, it’ll be fun and interesting to see them in upcoming issues to see them in action, and also to see their personalities.  There is a lot going on in the 27 pages of this issue, but I’m sure everything will come together in future installments of this series.  Sometimes, what makes a great story work, is when there’s so much going on in a universe, that these subplots will be focused on in future stories.  Well done to the creative team.  I rate “Geek-Girl #5” 4.7 Geek-Heads out of 5, the characterization is on point, and I highly recommend this book to comic books readers and fans of independent comics.  Below are some options for buying this issue digitally or in print: