The third installment of “Plague” has finally arrived, and in the previous issue, the cliffhanger was so intense, how will things play out in this story? “Plague” is created by Dennis MaGee Fallon, Jason Palmatier, and Zach Brunner.  Pencils, inks, and colors by Zach Brunner, lettering by Dave Sharpe, and written by Dennis MaGee Fallon and Jason Palmatier; published by Harry Markos for Markosia Comics.

Issue two ended with the three heroes, Friar Robb Aubert, Danann Atreyu, and Twylyth Tegg (King of the Fey), finding a boat and sailing off the Eastern shores of Northern England.  Robb also noticed that the village they just sailed from is burning, so they realize that the Warbishop Jean de Moray is hot on their trail.  How far will the Warbishop go to capture Robb, Danann, and Tegg?  And since they’re at sea, will the trio be safe from the Warbishop?  But what lurks beneath the sea, directly under their boat?  In this third issue, readers will find out…

The story begins with the true nature of the Warbishop; we see what he does to the people who commit sins against the church.  It’s horrifying, especially in three panels where readers will see a woman running for dear life, carrying her baby.  This is the point in the series where this plague feels more realistic, and you can almost feel the pain that these characters have endured.  If this isn’t enough, the Warbishop sends out a swarm containing the black death, and sets out to sea with his army. 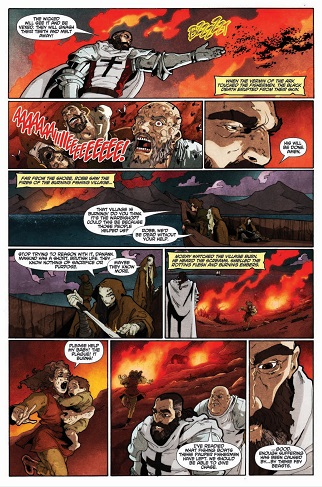 At this point in the story, the action escalates to a higher peak.  Robb, Danann, and Tegg not only have to deal with the Warbishop and his army, but they have to avoid the swarm carrying the plague, and that…that creature that lurks beneath the sea.  The Kraken!  And it’s destroying the ships like there’s no tomorrow.  Will anyone be safe from this monstrous mythological creature?  How will our heroes escape and find safety?  All this, and it’s only the middle of the story!

I won’t spoil the rest of the story, but it’s worth reading and seeing for yourself!  More creatures are introduced, another major fight scene occurs, and another cliffhanger will make readers want to come back for more.  Just as the action intensifies, the story concludes, but this is a good thing.  On the second to last page, there’s a cast of the creatures featured in this story, and their backstories.  This is a nice way to end the story and give an insight to these legendary beings.

The artwork and colors by Zach Brunner are amazing throughout this book.  From the opening sequence (and the use of reds to symbolize the horrors of the plague), to the massive size of the Kraken, in one word…WOW!  The Kraken is huge in size, and with the destruction caused by this creature, readers will feel like they’re in one of those boats holding on to dear life!  The story by Dennis MaGee Fallon and Jason Palmatier progresses nicely as well, and this story is so fast paced with action and hints of realism.  Once again, the lettering by Dave Sharpe are executed nicely as well, bringing this book to life. 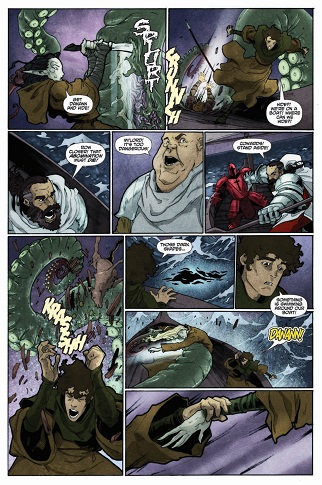 Overall, this is the best installment in this series thus far.  From cover to cover, “Plague #3” has many elements that make a comic book great.  With a very high recommendation, I rate “Plague #3” 4.8 Geek-Heads out of 5!  This is a series that every comic book reader should be reading right now.  “Plague” is definitely the sleeper-hit comic book series for 2017, and you can purchase it HERE on comiXology.