A big thank you goes out to Jin Chan Yum Wai (creator of High School Romance), for sending me a review copy of his latest one-shot series, “XERO: King of Thieves,” which is currently featured in issue #74 of Saturday AM, “a bi-weekly digital English-language magazine, featuring diverse artists, characters and, the hottest amateur manga webcomics in the world.”  As quoted by the staff at Saturday AM, “XERO: KING OF THIEVES – our very 1st manga from China! Jin Chan Yum Wai brings a TRULY DELIGHTFUL ADVENTURE COMIC to our readers.”

Looking at the cover, readers will see the title character, Xero, and he’s carrying a bag…that has a smile on its face.  This peaked my interest, so I wondered how this story would play out.  From the opening sequence, readers will see a similar plot to the one told in Eiichiro Oda’s manga/anime series of “One Piece.”  But, here’s what separates “One Piece” from “XERO: King of Thieves,” the beginning of THIS story is the epilogue.  Therefore, Xero is the current “King of Thieves,” and readers won’t see his gang or their quest on accomplishing this feat.

One noticeable detail is the Akira Toriyama inspired artwork.  There are similarities to the series “Dragonball,” but the story is far from being similar.  The story starts off with Xero being hungry, and he asks the bag how it’s doing.  The bag simply responds with a hungered look on its face as well, but what are Xero and the bag waiting for?

A panel shows the readers the front page of a newspaper, “The Saturday Times,” and the headline reads, “King’s New Crown.”  Shortly after, Xero hears a truck approaching, so Xero and the bag hop on down from the canyons to sneak on top of the truck.  Xero pulls out his grappling hook to enter the back of the truck, and his description of the crown will make readers chuckle, but despite Xero’s opinion of the crown, he’s on a mission with the bag, so they “get-a-stealin’.” 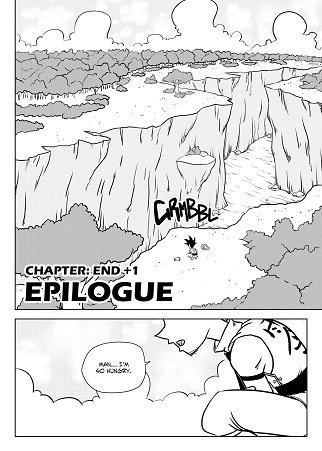 Sometimes people say things and regret saying those words shortly after…Xero has one of these moments as he’s attempting to steal the crown.  Another character appears, and she tosses Xero from the rear of the truck.  The two fight for a few pages while engaging in a conversation.  This is where the action takes place in the story, but this is where the basis of the plot is revealed… 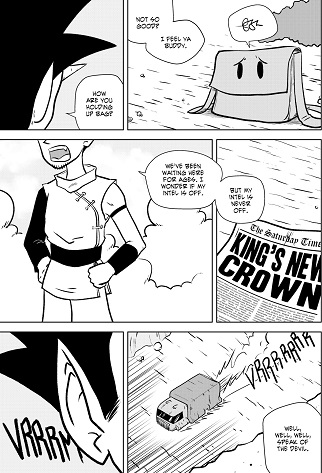 The final act of this story is so intense, readers will want to read more…but this is a one-shot story, so this is it (for now).  This is a story that’s different, unique…people won’t read an adventure quite like this, and that’s what makes it so fun to read!  The artwork and story by Jin Chan Yum Wai are presented nicely in this issue, and it’s completely different from his other series, “High School Romance,” so it’s nice to see a different genre from him played out so well.  Only time will tell if we’ll see more of these characters…

Overall, this was fun to read, and I rate “XERO: King of Thieves,” 4.5 out of 5 Geek-Heads!  And this is one of five stories featured in issue #74 of Saturday AM!  There are also interviews, pin-ups, and much more in each publication!  You can purchase Saturday AM #74 by clicking HERE.  OR…you can purchase a yearly subscription to Saturday AM for as low as $5 (basic plan; 20 issues per year), by clicking HERE.  There is also a premium membership offered at $25 per year, with more incentives.