With the anticipation of the new Stephen King movie, “IT,” premiering nationwide this week, we have to wonder…how is this remake (of a classic film) going to affect clowns in the real world?  It’s bad enough that there were many clowns spotted worldwide scaring people from city to city last year (as reported HERE and HERE), but what of the real clowns, the ones who make a living off of wearing the makeup, having the big red noses, big shoes, colorful hair, and have smiles painted on their faces?  What will happen once the new “IT” movie premieres?  Will there be more creepy clown sightings worldwide?  Will real clowns find it difficult to find employment?  And how will people with coulrophobia deal with this? 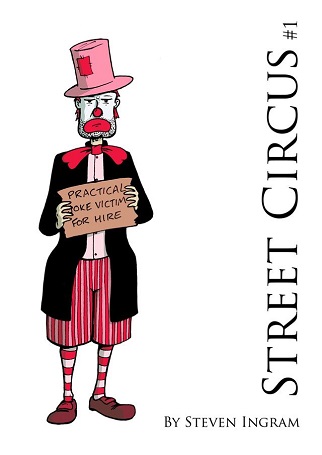 “Street Circus No. 1
The clowns were kicked out of the circus after Stephen King’s IT was accidentally shown during the childrens programming on the BBC.

This issue follows Bonzo, former Clown Prince of the Circus Ring as he tries to navigate the post IT world.” 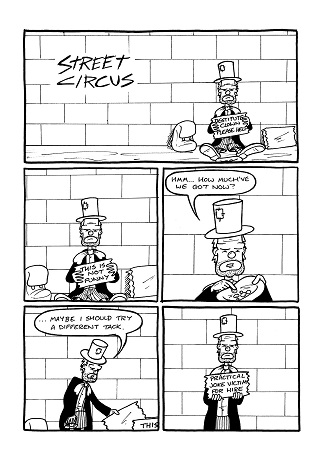 Having read this synopsis (and being a fan of fictional creepy clowns), I decided to purchase this book and read it.  The opening pages show the main character of this story, Bonzo, “Clown prince of the circus ring,” narrating the current downfall of clowns.  One event, ONE mishap on the BBC, ruined clowns lives for five years.  For some clowns, this is all they know, clowning is their life, they have no other skills to find other employment.  Even if they have a small chance to perform in the streets for by-passers, something always goes wrong (or taken into the wrong context). 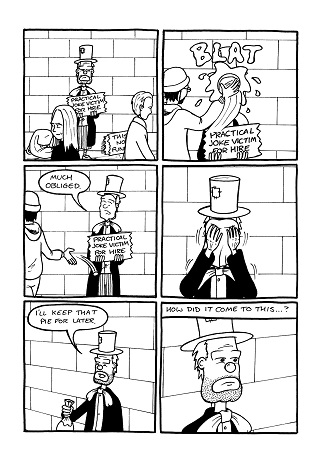 But what can be worse than this?  People can find out by reading this story.  Then they will see the good, the bad, and the true sadness that lies beneath the clown makeup, under those painted-on smiles.  This also has one of the best lines at the end of the story, because after all…this is being narrated by a clown, and this can be read before the movie, “IT“ premieres! 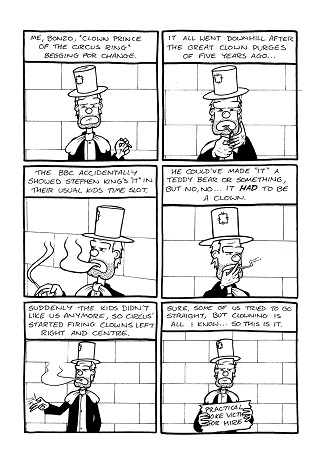 Overall, this was a fun story to read.  Recent reports are stating that clowns (in real life), are having problems finding work (as stated HERE and HERE), so this story isn’t too far fetched.  This story has some defining moments, mixing various emotions as we see these clowns on the streets trying to find some kind of work.  They use profanity, they smoke, they drink, there’s mistaken acts of perversion; readers will feel what clown life is like…when things go downhill!  The black and white artwork looks great for this genre and location, and the story is well written.  My rating is 4.3 out of 5 Geek-Heads, worth purchasing and reading, especially for real life clowns or fans of clowns.  As Steven Ingram quoted, “Street Circus #1, a comic I made ages ago that is no longer in print is also on Comixology now as well so check that out if you want a rarity!”  “Street Circus #1” is published by Blurred Lines Comics.