“Quiet #1” is a digital comic book series I discovered on the (former) “ComiXology Submit” section of the app, and I reviewed it on Examiner when it was first released on May 20th, 2015.  Unfortunately, I didn’t backup the file for that review, so I have to re-review it for “Anything Geek Culture (AGC).”  Two good things about this are that I will read this book again and review it with a fresh, new look at the story and art.  The second reason is that I can review it with the AGC Ratings System (based on a scale of 1-5 Geek-Heads).  “Quiet” is a series that I can relate to because of the subject matter, specifically with the protagonist, Claire Glade. 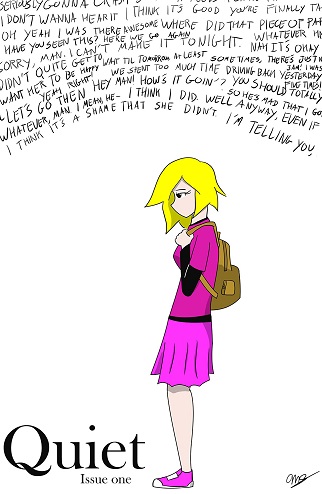 “College life isn’t all it’s cracked up to be. It’s difficult, consuming and pretty scary. It’s even worse when you’re as shy and introverted as Claire Glade. Sometimes just getting through the day is a challenge in and of itself.  A new city to navigate, new school to attend, new friends to make. The worst possible situation to be in when you’re as shy as Claire.  Perhaps orientation day won’t be so bad. It’s supposed to help ease you in and get to know everyone, right?”

“A comic set to a slower pace. For anyone who’s ever felt left out, lonely or socially anxious.”

“Quiet” is written and illustrated by Matthew Senn and published by Nightwalk Comics. Looking at the cover, we see Claire standing alone, with a sad look on her face.  Words/phrases can be seen on the top of the cover, representing background conversations that Claire’s not a part of, because she’s not part of any social groups or she may not have many friends.  This cover alone tells a story, and the reader will feel the essence of what Claire feels when she’s out in public.  Then we meet her older sister…

The story begins with Madison waking Claire up, because on this day, Claire’s new life will begin, whether she likes it or not.  Claire isn’t in a rush to get up, even though Madison wants her to get up ASAP.  Claire doesn’t understand why she’d have to get up early because it’s only orientation day, so it’s not like classes officially start on this day.  After a brief conversation between the sisters, Madison offers to give Claire a ride to school, and Claire doesn’t hesitate to take her up on this offer, since her other alternative is taking the bus.  This is the part where Claire narrates a brief back story and introduces the readers to her sister and herself.  This is the day she begins her new life as a college student at Daunton College.

Once Madison pulls up to the campus, you can almost feel the nerves Claire feels as she hesitates to get out of the car.  Madison has some words with Claire, but she can see the shy, timid look on Claire’s face as she makes way out of her car.  As Claire makes her way inside the building, she sees other students, all with unique looks and features, and with their groups of friends; cliques.  No matter where she goes, no matter where she’s at, she sees students talking and hanging out with their friends, something she doesn’t have.  Naturally, this makes her feel lonely and out of place, so when she tries to be social, it doesn’t work out…it’s like the other students don’t hear her, don’t acknowledge her, or it could be that Claire doesn’t speak loud enough, so she may be mumbling.

Once the orientation is over, the students are left to wander the campus, and Claire makes her way outside.  There she sees all the clubs she can join, “Film Club, Drama Club, Badminton Team, Chess Club, Swim Team, Art Club,” and so on.  How will Claire’s day end, good or bad?  Will she join any of these clubs?  And finally, will she find the courage to talk to anybody on campus before her sister picks her up?  The answers lie within this story, so give it a chance to find out what happens at the conclusion of this first installment of “Quiet.” 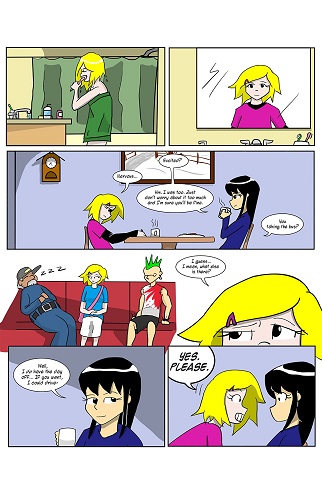 Reading this premiere issue of “Quiet” brought back memories of how well structured this story is, and how I felt on my orientation day back when I was starting college.  There are a lot of feelings I can relate to with Claire…but I don’t think I was as introverted as she is.  Still, making new friends was difficult for me back then, and that’s why this series is near and dear to my heart.  This story has realistic elements that introverted, shy, lonely, and anti-social people can relate to, and Claire proves that she’s not alone in this world, there are so many others just like her.  The simplistic, manga-style artwork works well with this series, combined with the story, the artwork meshes well and gives it life.  Overall, I rate “Quiet #1” 4.5 Geek-Heads out of 5, premiere issues have to introduce the characters, set up the plot, and keep the readers interested…this issue starts off in the right direction, and readers will want to come back to find out what happens next.  “Quiet #1” can be purchased for 0.99 on ComiXology HERE.