This Kickstarter ended with 896 backers and the total pledges amounted to $60,146, so the final stretch goal has been unlocked…the La Muerta coaster!

Below is the digital cover for the new “La Muerta #1: Vengeance!” original graphic novel from Brian Pulido and the crew over at Coffin Comics.  The Kickstarter campaign launched on Wednesday, June 14, and within the three days before this posting, not only has this project been fully funded (within sixty hours after launch), but there have been ten stretch goal items that have been unlocked!  For those who are unfamiliar with La Muerta, the cast of characters, or the Kickstarter process, read below to find out more.

To start things off, here’s the official Kickstarter video…

Here’s some more information, taken directly from the Kickstarter page:

Maria Diaz was a US soldier returning from a tour of duty in Afghanistan to be reunited with her family. But everything changed on that fateful Dia de los Muertos. The Zavalas, a death-worshipping crime cartel led by the nefarious Mama Z murdered Maria’s entire family in cold blood. Maria was left for dead.

Maria woke out of a coma eight months later to find her family dead and gone. She sought justice but found none. Maria dared the impossible. Aided by the mysterious Faustino, she avenged her family and sent the Zavalas’ to hell. The cost to her soul was immeasurable.

A short time has passed…

Having avenged her family’s brutal murders, Maria Diaz thought she could hang up her guns forever. She thought wrong. Something is slaughtering helpless immigrants, including innocent children. Once more, Santa Muerte, the saint of death, calls upon Maria to be an instrument of vengeance. And again Maria heeds the call, donning the guise of La Muerta.

In her relentless pursuit of justice, Maria violently confronts Brujo, a crime boss / warlock and his sexy side kick assassin Sangre, “Loco” – a kill-crazy Luchador vigilante, and an ancient, remorseless evil that makes her question her very existence.

What terrible price will Maria pay for the sake of justice?

In the tradition of Desperado and Death Wish, Muerta is a stylish, Mexi-Noir thriller with ferocious action to burn.

La Muerta #1: Vengeance is an all new 48 page, square-bound graphic novel. It’s a “Day of the Dead” version of The Crow meets the movie Death Wish as if it were directed by Robert Rodriguez.

Specifically, our story takes inspiration from Robert Rodriguez’s Desperado, a gritty, visual pallet of warm desert hues that bake the rough mission-style buildings. This is the daytime world of La Muerta — a dusty, sunburnt noir.

If Desperado helps inform La Muerta’s daytime imagery, then Alex Proyas’ The Crow inspires its nights. The Crow’s dark, brooding vision externalizes the story’s gloomy emotional tone. La Muerta will embrace the same shadowy imagery and gothic locations, yet give them a unique Latin twist. It’s an urban underworld where Aztec graffiti adorns dark alleyways and where the sad laments of Mariachis serenade the dead.

There’s nothing like a tension-filled, exhilarating action movie. But the best of the genre often stretch beyond explosions, car crashes, and martial arts mayhem. In this spirit, La Muerta strives to explore thematic concepts and social issues without preaching to the audience, or worse: slowing down the action.”

Here’s some bio’s from the creative team:

BRIAN PULIDO (Creator, Publisher, Editor): I created and published the Chaos! Comics universe including Lady Death, Evil Ernie, Purgatori, Chastity and dozens of other characters. I was inspired to create this story after attending the All Souls Procession in Tucson, Arizona. This event directly ties in to Dia de los Muertos. I found the experience beautiful and haunting at the same time.

JOEL GOMEZ (Illustrator): Joel illustrated La Muerta #1: Descent and Last Rites. He got his start as at Top Cow Productions as a pencil assistant. He went on to work on Iron and the Maiden with Jason Rubin and Francis Manapul for Aspen Comics. Joel was a staff artist at Wildstorm Productions where he worked on The Authority, Gears of War and Lost Boys.

MARSHALL DILLON: (Letterer): A veteran writer, letterer, and editor, Marshall has been working in the comic industry since 1994. He has served as associate publisher for Devil’s Due Publishing and managing editor for BOOM! Studios, Speakeasy Comics, Ice Kunion, and Udon Comics. He has lettered ALL of our Coffin Comics projects!

DAVID HARRIGAN: The ARTASSASSIN’s credits include covers for Coffin Comics.

*Below is the video of “Running of the Pulido!*

FRANCISCA PULIDO (President): Francisca was Chaos! Comics (classic era) cofounder and Vice President. Under her leadership, the company became the number one independent comic publisher of the 1990’s. Today, she charts the path for Coffin Comics.

BERNIE FRITTS (Graphic Designer): Bernie designs our Kickstarter and stretch goal graphics and our advertising art. He also teaches his craft at schools in the Phoenix, Arizona area.

JIMMY CALABRESE (Marketing): Jimmy oversees the Coffin Comics social media and comic market relationships. Jimmy is president of Spookshow Records, the owner of Calabrese Marketing and a member of the band Calabrese.”

So many talented people are involved with this project, and by clicking on the Kickstarter page, you’ll see more information about them all.  The great thing about Brian Pulido’s Kickstarter projects are if you have any questions, Nick Gallegos of customer service is on it, he responds quick!

Here’s seven pages of preview art from the Kickstarter page!  Remember, this Kickstarter project HAS ENDED as of Friday, July 14, 2017!  This page will be kept online for nostalgic purposes.  As us veteran Brian Pulido fans would say, “SWORN TO THE BLACK!” and in the words of La Muerta, “IN DEATH SHE LIVES!” 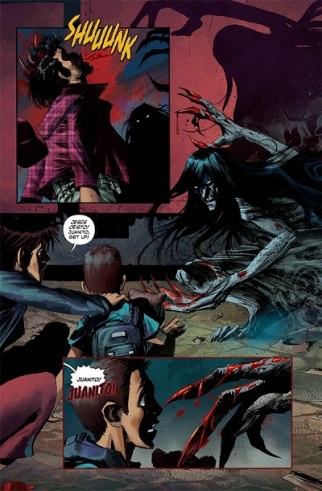