“Lupe is just your average, insecure, well-meaning, occasionally cranky teenage girl whose life is completely turned upside down when she discovers she has superpowers at her quinceañera. Her quince powers only last as long as she’s fifteen, so over the course of this rollercoaster year, we follow the adventures of Lupe as she figures out what it really means to be a hero.” 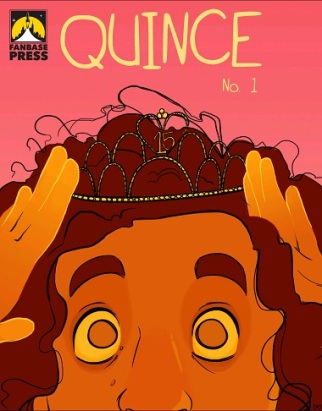 “Quince” is a twelve-page, digital comic book I found on ComiXology while browsing the “New Indie Releases” category.  This book was released on January 11, 2017, has an age rating of 9+ only (for some minor wording), and is published by Fanbase Press.  “Quince” is created by Sebastian Kadlecik, written by Kit Steinkellner, and illustrated by Emma Steinkellner.  This digital comic book retails for $0.99, so it’s worth the purchase, but as far as the story goes…

Immediately, readers are introduced to the protagonist of the story, Lupe, and she’s narrating her life and her surroundings to the readers.  It’s the day before her quinceañera, and her fellow classmates seem to be paying extra attention to her.  The thing is, people NEVER pay attention to Lupe, because she’s a total nerd who watches fangirl shows on Netflix.  But, because of her quince, her classmates know there’s going to be a party with a DJ, and the best part…free food.  Shortly after, readers will be introduced to Lupe’s family, and their characteristics.  Her mom’s a nag, her dad’s embarrassing, her big brother’s smart and funny, her little sister is obsessed with Lupe, and last (but not least), is her abuela (grandma) Emma, and she’s the best, and never the worst.

Emma tells Lupe that the quince dress is ready, so Emma takes Lupe to the bedroom so she can try it on.  After a heartfelt moment, Emma has a serious conversation with Lupe, followed by a famous quote in comic book history.  The next morning, Lupe wakes up nervous for the festivities…and some comedic moments occur as well.  The story ends with the basis of what this series is all about; this is just the beginning!

Overall, this story was funny, touching, and nerve wracking; readers can feel what Lupe’s sensing from panel to panel.  My only complaint…twelve pages of story means this is a quick read, and by the time readers get to the last page, they’ll want to read more.  In ways this is good, it’ll bring readers back for the next installment, and ComiXology currently has four issues available, so catching up with this series won’t be difficult.  Overall, nice start to this series, I rate “Quince #1” 4.3 Geek-Heads out of 5, definitely worth reading.  ComiXology has two versions available, you may purchase the English version HERE, and/or the Spanish version HERE.