“When the King of the Fey dies from the Black Plague, his angry young heir, Twylyth Tegg, vows to save his people by any means necessary. That same night, we meet our hero, Robb Aubert, a fearful friar of the Jedburgh Forest who has lost his faith and fellow friars to the dreaded plague. Driven by a mysterious note from the German Bishop of Hildesheim, Friar Robb is about to catch the last boat leaving the English Isles for the mainland when he crosses paths with an injured English Fairy – Danann Atreyu – a fey girl who has just lost her family to the infamous Black Cross, the Warbishop Jean De Moray. But Moray is more than just a bloodthirsty tyrant, he’s a man haunted by the long-ago death of this baby brother and at war with himself over all he’s done in the name of God since. His dreaded Dyrewolves track Danann’s blood-trail to the gates of the abbey where Friar Robb has unwittingly taken her in. It seems Robb is harboring a magical creature – a crime punishable by death.” 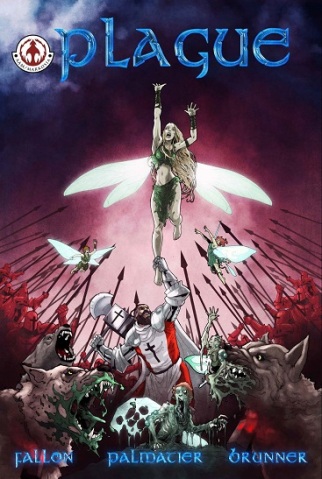 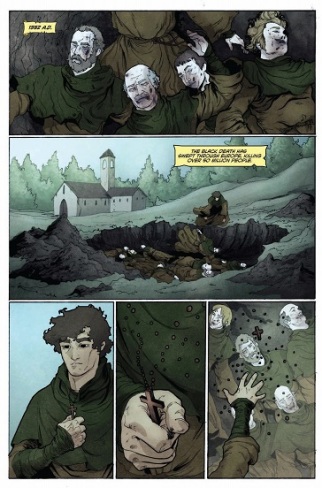 It’s been almost a month since the digital release of “Plague” on Comixology, and what drew my attention to this book was the artwork on the cover.  There are three fairies trying to escape from a Holy warrior, his paladins, and a pack of wolves.  There are two “decaying” people toward the bottom of the cover, one is in a wolf’s mouth, and the other is coming up from the ground.  The cover alone tells a story through the artwork, and judging from the cover alone, this may be an interesting book to read and visualize.

The setting is in the year 1352 A.D, and the “Black Death” has swept throughout Europe, killing over fifty-million people.  Dead bodies are seen in a hole that was dug up, and readers have a first glimpse of the protagonist of this series, Robb Aubert, as he looks down at the bodies and his rosary beads scattering within the hole.  Shortly after, readers will have a first look at Twylyth Tegg, the young heir of the King of the Fey.  The revelation is that this “Black Death” didn’t only affect the humans, but the Fey (Fairies) as well.  When the King dies from this black plague, Tegg sets out on a mission to rescue as many of his people as possible. 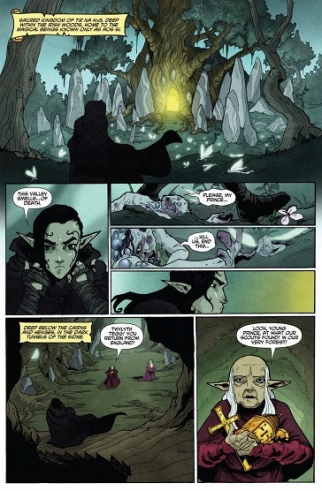 Shortly after, readers will see Friar Robb Aubert, and we see that he’s the last man standing, after a messenger visits to drop off a scroll from the Bishop of Hildesheim, who wants to take Aubert to the coast.  After losing all of his faith, Friar Aubert refuses to leave, so he stays behind.  As the messenger heads out, readers will see Danann Atreyu (a Fey girl), for the first time, along with other English fairies.  The scene shifts to a flashback, fourty-four years ago, to the tragedy of what happened to Jean De Moray’s family.  De Moray was having a nightmare, thus the flashback sequence, then the action is about to begin…

Jean De Moray was given word of Fey sightings, so he rounds up his paladins and the Dyrewolves, and sets out for carnage; no survivors.  Danann Atreyu and the other English fairies fly for their dear lives…but the black plague affects them fast, which weakens their fairy magic and leaves them visible to humans and beasts.  After the bloodbath, Danann Atreyu barely manages to escape, but she receives a helping hand…and the cliffhanger will make readers want to come back to see what happens next.

The cover art alone tells a story, and after reading this first issue, it didn’t disappoint.  The story is well-written, and for a premiere issue, the characterization was presented nicely.  The artwork is accurate for this time period and genre, and this is what brought these characters to life.  The colors are fitting for the different scenes throughout the story.  From the darks to the lights, from the flashback sequence to the bloody battle, the colors compliment this book from cover to cover.  Overall, this book is worth reading and experiencing, I’m anticipating the next installment of this series.  I rate “Plague #1” 4 out of 5 Geek-Heads!  This premiere issue has a good start, it has potential to be an up-and-comer in the comic book industry!  Readers can buy “Plague #1” on Comixology HERE.