The fourth issue of “Box Office Poison Color Comics” is available, both in print and in digital formats.  Looking at the cover, readers will see a character that hasn’t appeared in the series yet (not counting the prologue in issue one).  From first appearances, he seems to be a short, cranky, old man, so we’ll see what characteristics he has.  Also on the cover are Sherman and the unnamed woman from issue three, seen as statues and as silhouettes.  Only time will tell how this relationship will go.  “Box Office Poison Color Comics #4” is written and illustrated by Alex Robinson, colored by Pat N. Lewis, edited by Carlos Guzman, and published by Ted Adams for IDW Publishing and Top Shelf Productions. 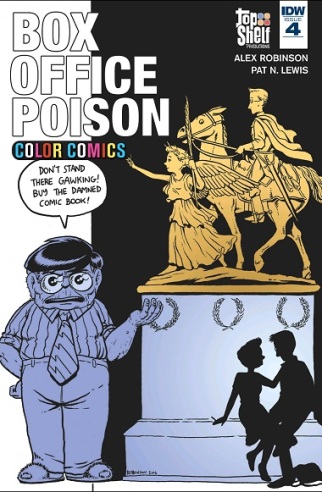 The previous issue had two plots going on, and in one of them, readers saw Sherman asking the “fire escape woman” out on a date, and her response was, “Sure, why not?”  Sherman was nervous about this, but excited at the same time, and this issue starts off with Sherman, all dressed up, to go on his first date with this unnamed woman.  Sherman has a minor conversation with his roommate, Stephen, but Sherman has to cut it short due to the time, as he doesn’t want to be late for this first date.  Sherman waits, and waits…and waits for the woman to show up at 7:30, but she’s a no-show.  That is, until thirty-five minutes later, and their plans change for the evening.  Deep down inside Sherman’s upset, but he soon gets over his anger, and all he wants is to find out this woman’s name, considering she knows his name.

Since Sherman and the woman missed the movie, she suggests going out to eat instead, so Sherman goes along with this plan, and gives her a single rose he bought for her.  Still, all he wants to do is find out her name.  Once they arrive at the place called “Slaggers,” the woman excuses herself to use the restroom, and this is the chance Sherman wanted so he can find out her name.  Sherman goes through her purse to find her driver’s license, but he’s nervous because he doesn’t want to get caught.  He finds out her name and puts her things back in her purse, just in time before she comes back from the restroom.  The moment he addresses her by her name, according to her driver’s license…it’s not a good thing. 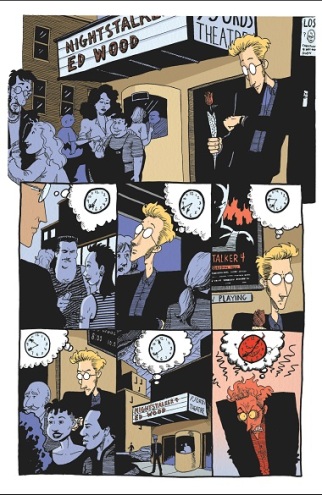 The second plot going on in this issue deals with Ed and how he didn’t get the job with “Zoom Comics,” from the interview he had in the previous issue.  This time readers see Ed with his family, and they’re having a serious conversation during dinner.  This scene may hit hard for some readers, having had similar conversations with their fathers, about how working while being under THEIR roof, eating THEIR food, watching THEIR cable TV, matters more than drawing silly pictures (especially for comic books).  These past times, especially when us comic book readers were kids, when fathers thought that being an artist wouldn’t put food on the table.  The difference is, Ed has a back-up plan, and he’s not going to give up his dreams to become a comic book artist.  The message here is, don’t give up your dreams, do what it takes to make it happen.

In the final pages readers will briefly see the short, cranky, old man from the cover, meeting Ed for the first time.  Then a splash page not suitable for children…then a brief scene where readers will see Jane and Stephen…and their former ties to Dorothy.  The bigger picture is slowly unveiling itself, and readers will see more with the upcoming issues.  What’s nice about these colorized reprints are the “Box Office Post-Scripts” at the end of each book.  Here, Alex Robinson shares background information with various panels, and the pages they’re found on.  It’s interesting to see how certain background characters appear, and some of the settings/architecture.  Following this are five covers from previous “Box Office Poison” comics and mini-comics.  Finally, this book ends with an eight-page ashcan preview of Erin Nations’ new series, “Gumballs.” 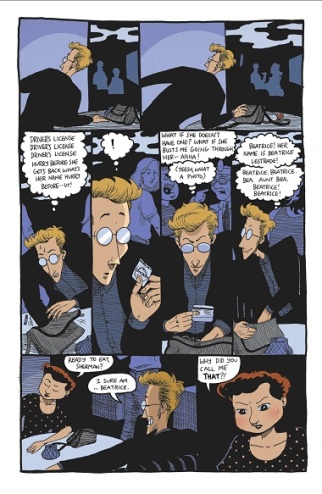 Overall, this issue is an addictive read.  From the moment the story begins, until the very end, readers will be drawn to these characters and their happenings.  Witnessing Sherman and Dorothy’s first date makes us realize that dates aren’t always perfect, but they can work out in the end.  It depends on the couple, the activities they do on their first date, and how things turn out at the end of the night.  Ed’s story, that deep conversation with his father, that shows reality, that some parents think they know what’s right for their children, but the children (as adults) have to believe in themselves, work hard, and make their dreams come true…at any cost.  People have to prove their parents wrong, and make them realize that they’re among the best in their desired field of work; career.  Everything else wrapped up within these thirty-seven pages make this issue worthy of purchase.  I rate “Box Office Poison Color Comics #4” 4.9 Geek-Heads out of 5, damn near perfection!  I honestly can’t recommend this series more if I could, especially for fans of independent comics and the reality/romance/drama genre.  This book has an age rating of 15+ and the digital version may be purchased from Comixology HERE.