“Cosplay is about having fun and creating art. It’s not about making other people feel bad because they aren’t a good enough craftsman or they don’t have the “right” body type. And it is not about superiority over others because you have a bigger online fanbase. Cosplay to me is exactly what it says in the name; costume play. Loving a character and bringing it to life in your own way whether you build a costume, buy a costume or commission it, it’s about the love that you give and giving it to others. Cosplay is about taking a chance whether it be online or in public. Putting yourself out there, in the name of fandom, representing what you love. Great risk comes with doing this. Risk that you will be criticized, ostracized, belittled, teased, etc.”

“Cara Nicole (aka AZ Powergirl) is more than just an internationally known cosplayer.  She is an artist, editor, master of ceremonies, panelist, educator in the industry, a community advocate across Arizona, and a fan favorite everywhere she goes.”

“Cara is so popular with fans, she has been guested to shows all across the country and even to conventions in both Canada and Mexico.  She exhibited at nearly 40 conventions in 2016.  Her credentials include Marvel and Wizards of the Coast (she modeled for a ‘Magic: The Gathering‘ card art), and a comic book editor with published work by Big Dog Ink, Qew Publishing, as well as creator owned projects at 183 Degree Studio.”

This is a brief introduction to Cara Nicole AZ Powergirl, and having her mini-bio as the introduction, now the promo for her newest and latest photobook can be initiated.  This book, “Cara Nicole AZ Powergirl Photobook 3,” has ended on Indiegogo, but you can still view it HERE.  This photobook is no longer available, and the campaign has ended.  The first photobook sold out and was reprinted 4 times, the second photobook has sold over 1,000 copies and was sold at over 50 conventions and many major comic book stores worldwide!  Cara’s third photobook contains 32 pages of cosplay AWESOMENESS!  There were several tiers and rewards that were being offered with this photobook, so people were able to back this campaign with the proper tier of their choosing. 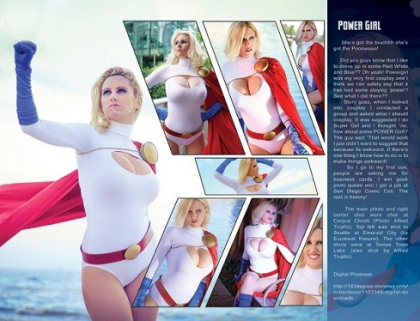 There were also stretch goals offered, and they unlocked as this campaign reached certain goals.  That’s what made these live projects so much fun, checking in to see what was new and unlocked.  It was also good to share these projects through social media, especially if people couldn’t pledge during that time.  Life happens.  Just spreading the word about this photobook made a big impact.

This photobook was only $25, PLUS a bonus signed photo postcard (with an additional $10, the second photobook could’ve been added on to any tier).  Other tiers offered photo ad space, metal prints, canvases, and VIP access.  Again, take a look at all the tiers and more photos by clicking HERE.  Thank you for taking the time to look at “Cara Nicole AZ Powergirl Photobook 3,” and remember, this campaign is over, but you can still view it!