Here is the softcover image for the new “Lady Death: Merciless Onslaught #1” original graphic novel that has ended, but you can still have a look at the campaign page and the rewards that were offered.  Read on for more details… 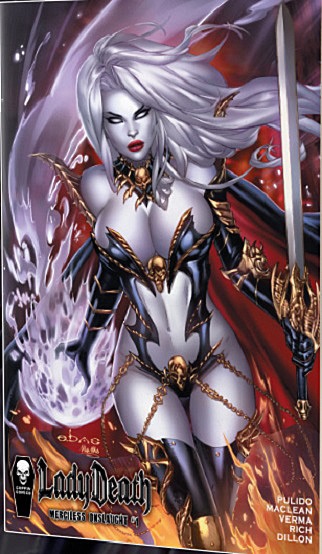 Brian Pulido’s latest Kickstarter has ended on April 14, 2017, and under two minutes, not only has the newest Lady Death graphic novel been fully funded, but in the end, it surpassed the 152K mark!  Impressive, especially since it was fully funded in under two minutes.  As of this posting, this Kickstarter has ended, so no more pledges can be made.  The great feature of these Kickstarter projects are the “stretch goals.”  Every project is different, and some projects are funded, while, unfortunately, others do not.  Since “Lady Death: Merciless Onslaught #1” has been fully funded (and far surpassed the $15,000 goal), twenty-one stretch goals have been unlocked, and a mystery one will be revealed soon.  The image below gives the breakdown of these unlocked items (UPDATED on Tuesday, April 4, 2017).

For those who aren’t familiar with the titular character, here’s some information taken directly from the Kickstarter page:

Lady Death is a supernatural, sword-wielding anti-hero who battles evil in Hell (and where ever she pleases). Once she was Hope, a teenaged girl who is deceived by demons in an effort to save her mother’s soul in Hell. She renounces her mortality for eternal life in Hell. To ensure her survival, she turns to the darkness within herself and begins a transformation into Lady Death.

WHAT IS THE NEW STORY, LADY DEATH: MERCILESS ONSLAUGHT #1?

Herr Reich, a rogue Nazi scientist has kidnapped Jake the last innocent in Hell because he suspects he is the key to enacting his master plan and conquering Hell.  But Lady Death ain’t having it. Aided by Haxan and Hellrider, the diva of death plans to rescue Jake and dismantle everything Reich holds dear! Featuring the sadistic Frau Helga and introducing Eldritch princess Caprice and her sidekick Char, Thanatos, demon lord of Hell, Wargoth of the Everkind and newcomers Steelheart and Mr. Atticus Marrow.”

Below is the official Kickstarter video…

Here’s some more information, taken directly from the Kickstarter page:

Lady Death: Merciless Onslaught #1 is a 48-page, square-bound all new graphic novel that builds on the mythology we created in Chaos Rules #1, Damnation Game #1, Extinction Express #1, Oblivion Kiss #1. It is the 5th chapter in Lady Death’s NEW Story.

And… As we launch this Kickstarter campaign, the creative work is 100% done. All we gotta do is print and ship — and that is where YOU come in! Printing and shipping ain’t cheap! Heck, no!”

And the MOST important part, the creative team:

“BRIAN PULIDO (Co-writer, publisher, art director, me): I created and published the Chaos! Comics universe including Lady Death, Evil Ernie, Purgatori, Chastity and dozens of other characters. I’ve written comics for A Nightmare on Elm Street, Chucky, Friday the 13th, Texas Chainsaw Massacre and many more. I am on Hero Initiative’s fundraising board and have received the CBLDF Defender of Liberty Award.

MARSHALL DILLON (Letterer): A writer, letterer, and editor, Marshall has been working in the comic industry since 1994. He has served as associate publisher for Devil’s Due Publishing and managing editor for BOOM! Studios, Speakeasy Comics, Ice Kunion, and Udon Comics. Current work includes: Lady Death and La Muerta.”

There are so many other talented people involved with this project, and by clicking on the Kickstarter page, you’ll see a rundown on the entire creative team.  The great thing about Brian Pulido’s Kickstarter projects are if you have any questions, Nick Gallegos of customer service is on it, he responds quick!

Enough of the babble, here’s seven pages of preview art from the Kickstarter page!  As us veteran Lady Death fans would say, “SWORN TO THE BLACK!” and of course, “LONG LIVE LADY DEATH!” 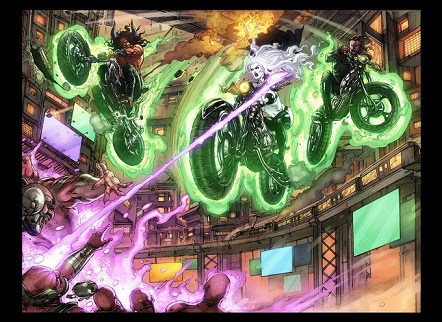 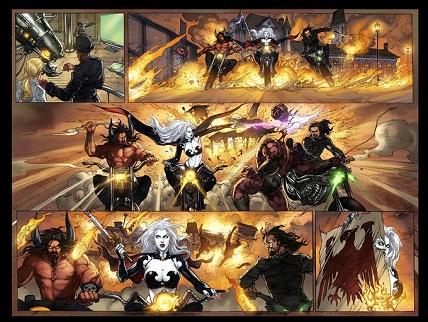 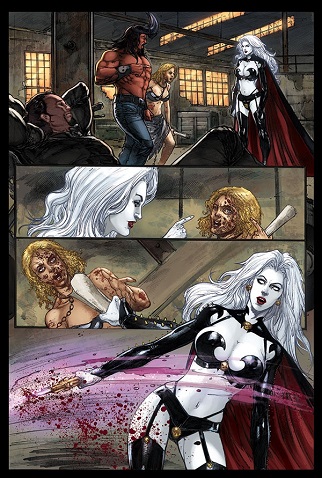 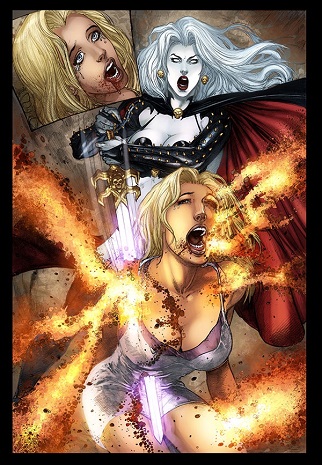 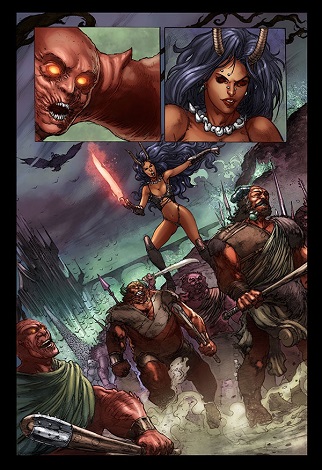 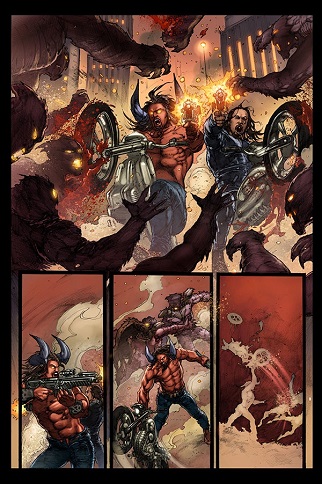 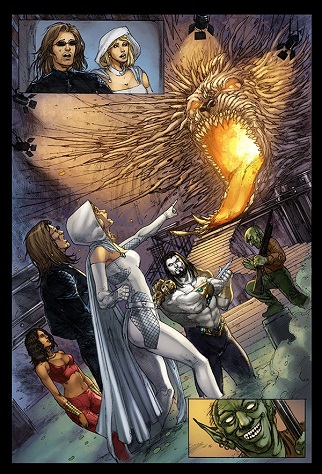