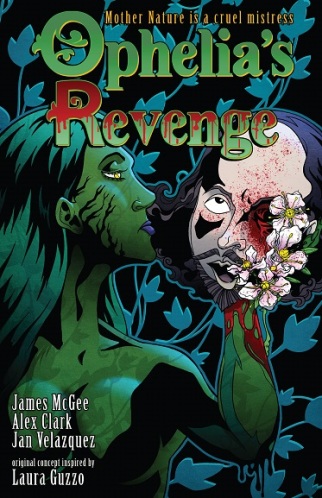 These are two quotes that best described Ophelia’s Revenge, when the Kickstarter was live back on August 29, 2016.  Laura Guzzo’s original art was the inspiration for Ophelia’s Revenge, and it’s a one-shot comic with twenty full color pages. The digital copy has been released to the backers of this Kickstarter, and the print version will be available soon from Red Stylo Media.  The creative team consists of writer James McGee, artist Alex Clark, and colorist Jan Velazquez.

The story begins with an infamous scene from Shakespeare’s Hamlet, that is, until “Hamlet” forgets his lines. Then the scene shifts to an aerial shot of a stage with actors performing Hamlet at a Renaissance faire.  Readers are introduced to Jean, who’s performing as Ophelia, and Larry, who portrays Hamlet in the play.  Readers will also notice that the two lead actors have a real-life relationship going on…or so thinks Jean.  When the relationship goes South for Jean, we see how obsessed Jean is with Larry, and it’s kind of scary. 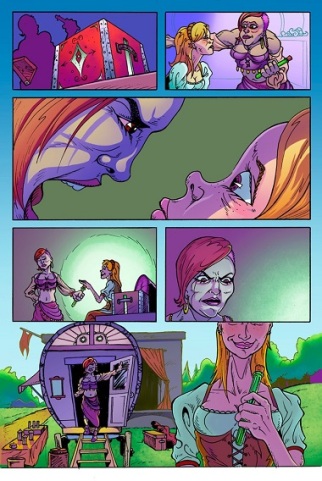 So what crazy things has Jean been doing to get Larry to notice her, let alone the lengths she’ll go through to get him back?  Around mid-story, another character comes into play, Miranda, and she’s the Renfaire’s “Mistress of the Ancient Tarot Arts.”  But the question remains…how powerful are Lady Miranda’s spells?  Do they work, or are they novelty tricks to mysticize the audience?  Or maybe it’s the very essence of Jean, her obsessive love for Larry, that changes the events of this story.  This story will answer all of these questions, and provides a conclusion that will easily be remembered for years to come.

I remember glancing at this Kickstarter, but I wasn’t sure what to expect, so I bypassed it at first.  During that time, I was already pledging to multiple comic book projects, I didn’t think much about this one.  Days later, I received a notification about Ophelia’s Revenge, and I gave it a second glance.  After watching the promo video and seeing the preview artwork, I decided to pledge to this project.  Thankfully, it was funded, and all of us backers were able to receive this book (and the bonuses that were included), with the tiers that we selected.  But the book, combining the story, artwork, and colors, was it worth the funding, effort, and time that was put into it?

Absolutely.  The story was excellent, and it makes more sense if you’re familiar with Shakespeare’s Hamlet, but it’s not necessary to know the back story of this classic book.  The artwork fits the theme of this story, and the facial expressions on the characters are well illustrated.  Especially Jean, who starts off as a love struck woman with her obsession for Larry, we see those loving, warm smiles turn into obsessive, hateful frowns.  And let’s not forget the colors, which compliment the story to a point where if there was no dialog, we’d still know what was going on.  This creative team gave us a book that starts off bright and enlivening, then turn it around to be dark, bloody, and startling.  This story was full of surprises and was very entertaining. Ophelia’s Revenge can be purchased by clicking here. Red Stylo Media has another winner with this book, and I rate it 4.6 Geek-Heads out of 5.