Often I love to search Comixology’s “New Indie Releases” for comic books that aren’t mainstream, comics that are waiting to be purchased and read, and one stood out to me back on March 26, 2014.  This independent comic book is published by Blue Juice Comics, and it’s called “Anne Bonnie.”  The creator/writer/artist is Tim Yates, co-writer is Lelan Estes, and the layout artist is Tony Vasallo.  After seeing the three-page preview, I thought the art style looked amazing, and the summary had me intrigued.  The summary states: 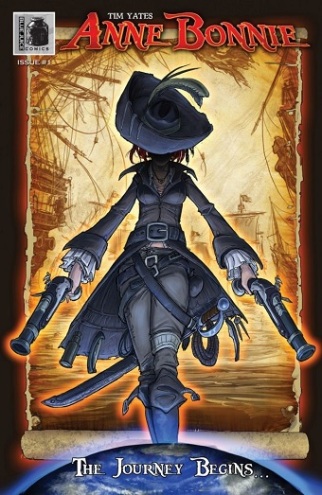 Set sail on the Great Sea, a world full of magic, danger, and excitement!  Join Ariana, a most unlikely heroine, aboard an enchanted ship as she discovers what it truly means to be a pirate, on a journey that will change the world forever.” 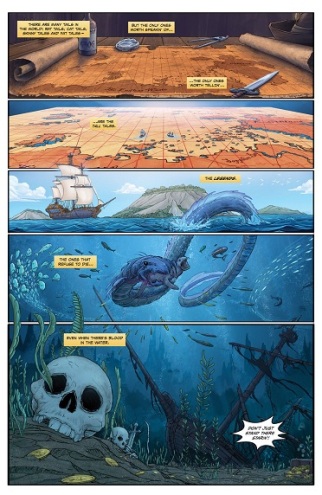 The action begins immediately within the first pages of this book, then we’re introduced to the protagonist of this series, Ariana.  Ariana’s listening to a story of the Pirate Queen, Anne Bonnie, as told by “Ken” Shen Kenoshi.  One of the antagonists of this series, Lord Firestorm, interrupts Shen’s conversation with Ariana, and the readers get a glimpse of the Lord’s power.  Later that evening, Shen decides to leave town and set sail, but Ariana wants to go with him.  Shen explains to her that the sea is dangerous for little girls, and staying in town is safer for her.  He leaves her with a copy of a key, a key that he says he’ll come back for one day… 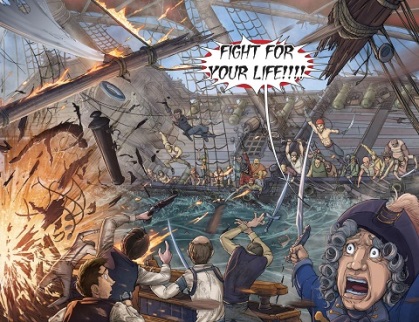 The artwork by Tim Yates is beautifully illustrated, and the vibrant colors give the characters and settings a life of their own.  The story is well written for a premiere issue, the characterizations are paced nicely, and there’s enough action to draw new readers into this world of pirates.  It’ll be interesting to see where Ariana goes from here, and to see if she has what it takes to be a pirate.  The seas may not be a place for little girls, but Ariana is setting sail to prove everybody wrong…and this series is fun and exciting to read, I can’t wait for the next installment!

I rate Anne Bonnie #1: 4.3 out of 5 stars, a very good starting point to a new series!  I would highly recommend this debut issue to comic book readers who want to read something new and different; this could possibly be the sleeper hit of 2014!  This book can be purchased directly from Blue Juice Comics here, and digitally on Comixology here.